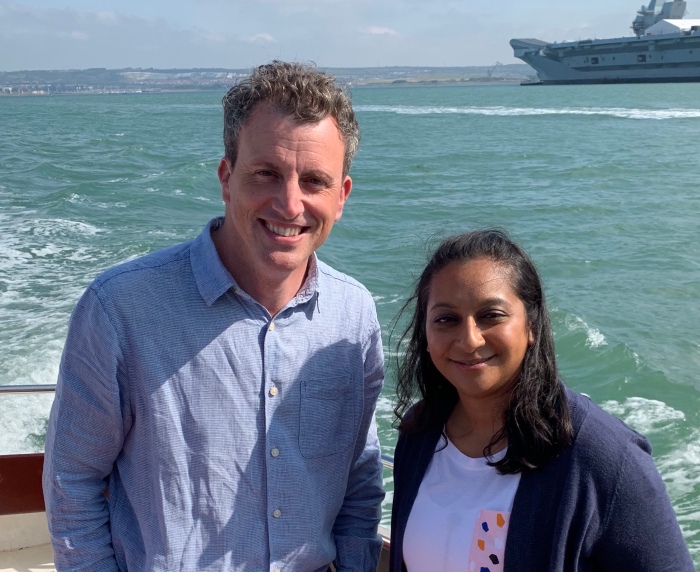 I’m absolutely thrilled to be teaming up with an old friend: the brilliant Raksha Dave for series 2 of Digging Up Britain’s Past. The series sees us travelling through some of the key episodes of Britain’s history but casting a critical archaeological eye on what the material remains can tell us. In this first programme, we’ll be joining a team from Reading University at a site in Silchester, near Reading, as they examine one of the best-preserved Roman sites in Britain. It’s remarkable what has been left behind – and to see a whole Roman city abandoned. Whilst Raksha checks out the excavations of the bath house, I am sent across the country looking at comparable sites and looking at the archaeological evidence for the decline of the Roman way of life in Britannia. One of the highlights for me was a walk along an abandoned Roman road that once led to Silchester. It felt eerily quiet and serene for a road that once carried the wealth and might of the Roman world along its cobbled stones. And then there was Boudicca’s revolt. Much of what we know about this revolt comes from a handful of quite problematic historical sources – which, necessarily, we have to take with a pinch of salt. But seeing the archaeological evidence for the levels destruction wrought on the city of Colchester by Boudicca’s armies brought home, first hand, just how violent the uprising was, and how turbulent those early years of Roman conquest were.

Anyhow, sit back and relax for what promises to be an excellent evening of archaeological fodder. Only too pleased to be the warm-up act for Tony Robinson’s latest History of Britain.

View all posts by ajlanglands

The #local #regional and #national character of #Britain is intimately linked to its rich array of #historic buildings. It is vital to secure the long term future of this fantastically rich resource by preserving the skills required for its upkeep. @wmcf_trust they do just that and I am delighted to be supporting them in this endeavour. @spab1877 @spabscotland @spabireland #buildingcraft #conservation #placemaking #vernaculararchitecture #heritage
Exploring #cynefin with yrs 7/8 @Pentrehafod at the hugely welcoming @GlynnVivian - Inspired by ‘Art and Industry’, Trinity produced this amazing piece of work reflecting on #heritage and #regeneration. @ChartSwansea @SwanseaHistory @SwanseaUni
#crefftwr #heritagecrafts in #wales @tyturnerpenarth till 12th June - the state of craft is in good health in Wales
An amazing array of textures and talent at #crefftwr #heritagecraft in #wales currently exhibited at @tyturnerpenarth till 12th June - honoured to have been asked to write a supporting essay.
The #threshing sledge known in #antiquity as the #roman ‘tribulum’ was still used widely around the #mediterranean into the #20thcentury - hundreds of #flint flakes are set into the sledge base and the implement dragged by draft beasts over the cereal crop, the flints serrating the #grain from the plant. This from the #basquecountry #historicfarming #sustainableagriculture #ancientcraft #heritage #heritagecrafts
Quick #pine cone fire in to keep the chilly #spring evening at bay. A #friday treat. #sustainable #cottage